Logo Lowdown from the 2012 elections. Part 2–donors OFF the record, or off the radar

Some of you might remember “CREEP” from 1972’s Nixon-McGovern matchup. It could’ve been an apt code name for Tricky Dick himself, but instead it referred to the “Committee to RE-Elect the President.”

And creepy it was. That spring, Nixon and team orchestrated a secret, two-month-long fundraising push that brought in $20 million from corporate executives and other wealthy favor-seekers. “Anybody who wants to be an ambassador must at least give $250,000,” Nixon instructed his chief of staff, Bob Haldeman.

The money had to be delivered to CREEP by midnight of April 7, because a new law would then take effect requiring presidential campaigns to disclose their donors. Money poured in–just hours before the deadline, for example, Pennzoil Corporation hand-delivered $700,000 in a suitcase to CREEP headquarters. This included a $100,000 bundle of checks and cash from another oil company president who laundered it through a Mexico City bank, had it carried back across the border by a Mexican colleague, who drove it to Houston and literally dumped the money on the desk of Pennzoil’s president–who stuffed it in the suitcase with the other money and rushed it to a waiting corporate jet for just-in-time delivery to DC.

All of CREEP’s corrupt haul would likely still be secret–except that a chunk of it went into a bank account that was used to finance the bumbling Watergate burglars. As Nixon’s sleazy money network was subsequently exposed, public outrage compelled Congress to enact reforms to halt this backdoor sale of government to undisclosed corporate interests.

Forty years later, however, CREEP is back. Thanks to 2010’s disastrous Citizens United ruling by a handful of raging corporatists on the Supreme Court, the moneyed elite can again buy as much political power as they want, without disclosing who’s doing the buying. In last year’s presidential race alone, total spending soared to $2.6 billion, double what it was just four years ago–and more than a billion dollars of that $1.3 billion-jump came from the secretive groups brought forth by the five Supreme Corporatists.

The Court decreed that “outsider” forces (in particular, corporations) are now free to finance their own independent campaigns to influence elections, separate from the campaigns of candidates and parties. As a result, three new money channels have been opened for these “outsiders”:

1. SuperPACs. Unlike regular political action committees, these supersized creatures can take unrestricted sums of money drawn right out of the bottomless wells of corporate treasuries to run their own, independent electioneering efforts. In the real world, however, candidates have simply set up their own SuperPACs and installed trusted cronies to run them, making “independence” a joke.

2. Social welfare charities. This is so cynical that it’s sick. Citizens United allows nonprofit social welfare charities, which do not have to name their donors, to spend money in elections–as long as the primary purpose of their charity is not political. Ha! Blatantly political outfits (including those run by Karl Rove and the Koch brothers) rushed to create their own social welfare masks. Last year, they funneled more than a quarter billion dollars in secret donations into their social welfare political campaigns through this gaping “Dark Money” loophole.

3. Trade associations. Multi-corporate organizations, such as the US Chamber of Commerce, have not been allowed to spend their membership funds directly on electing or defeating candidates–until Citizens United. Last year, the CofC alone poured $36 million into its newly sanctioned electioneering campaigns, nearly all of it trying to defeat Democrats. Since trade associations are not required to disclose the sources of their funding, the Court’s decision allows such giants as ExxonMobil to use the Chamber channel for running vicious attack ads–without infuriating customers by having to put their own brand names on the nastiness.

We’ll be posting each of these images individually over on our Facebook page, to make it easier for Lowdowners to share them with their networks. For those of you who are on Pinterest (you know who you are!), there’s a board of images to share there, too! 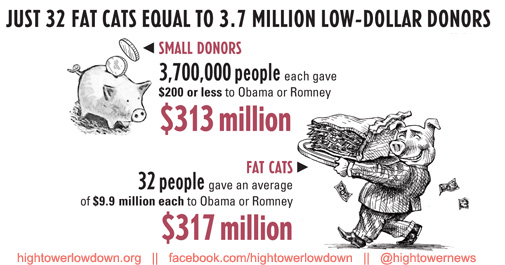 Candidates like to claim that they are supported by “the common people” (with the glaring exception of Romney, of course, whose patrician bearing and occasional moments of candor revealed a deep disdain for commoners). Most cam- paigns even spin their financial reports to make it appear that their funding is derived from that beloved group known as: “small donors.” The new Citizens United reality, however, is that very big money from a few very fat cats now dominates election finance. Consider this startling contrast from last year’s presidential contest: 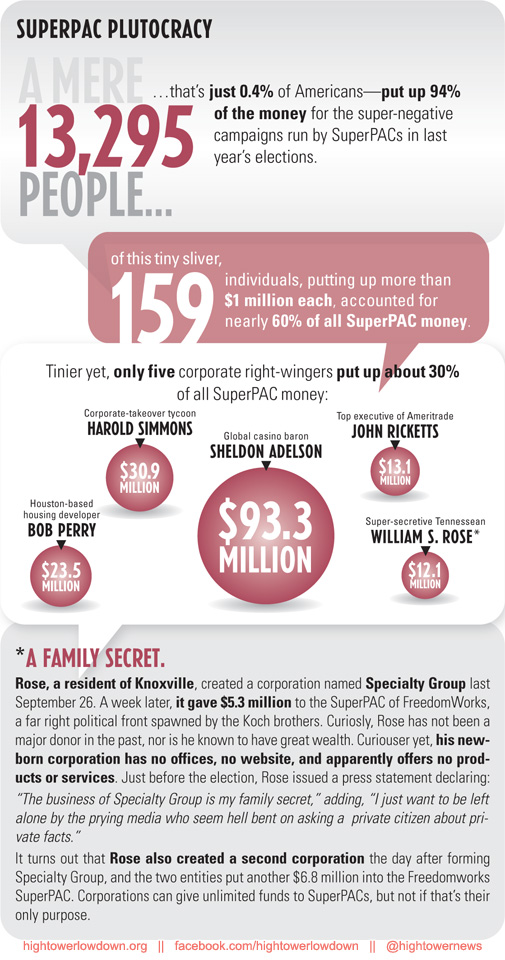 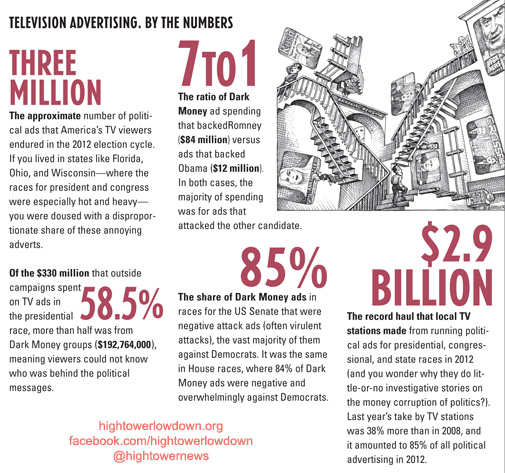 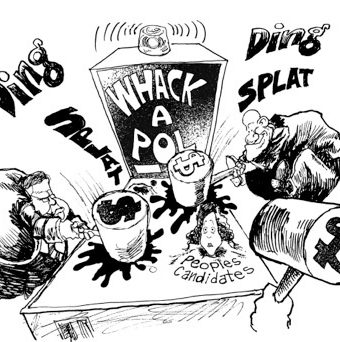