Corporations that paid-to-play in the last election

FROM THE “LAND OF THE CLUELESS AND CONNIVING,” meet a couple of gentlemen who insist that America’s political funding system is working splendidly. They report that there’s absolutely nothing going on between the money interests and our lawmakers in Washington that should trouble our fuzzy little minds.

First up is one Paul Miller, president of the American League of Lobbyists (bet you didn’t know that lobbying is now such an industry in Washington that they’ve formed a lobby group for lobbyists!). He offers this insight:

“Our government is not corrupt, lobbyists are not bribing people, and members of Congress are not being bought for campaign contributions. I don’t think we can say for certainty that the current system is broken.”

Gosh, I wonder if he can say “TomDeLay JackAbramoff DukeCunningham” with certainty…or a straight face?

Next comes Ben Barr, who’s from a pro-corporate Arizona think tank called the Goldwater Institute. In an interview last October on the PBS television show “NOW,” he shared this wisdom:

NOW: Do you think money is a problem in politics under the traditional system?

So, I hope you’ll feel perfectly free to peruse this month’s Lowdown listing of brand-name corporations and others who paid pricey sums in last year’s congressional elections to buy oodles of speech for themselves. Their purchases began at the $100,000 level and ran higher than $3 million.

Lest you think that this money amounts to a gross distortion of our democracy, I’m sure that Messrs. Miller and Barr would point out that, hey, it’s an open system—if you’ve got $100,000 and up, you can buy some speech, too! Imagine how Jefferson, Thomas Paine, Madison, and the other founders would feel about this perversion of their concept of “free speech.”

And if the 2006 money appalls you, wait for the presidential race, where it’s predicted that serious contenders will have to put up $100 million each to be competitive in the primary elections. This means that Clinton, Edwards, Giuliani, McCain, Obama, Romney and the rest will be dragging sacks all this year to wealthy interests, with the candidates needing to fill their sacks with $2 million every week!

To help reform this destructive, corrupting, absurdist system, call Public Campaign (202-293-0222). Meanwhile, you might want to take your own personal stand by voting with your consumer dollars, using this month’s and last month’s Lowdowner’s Shopping Guide. 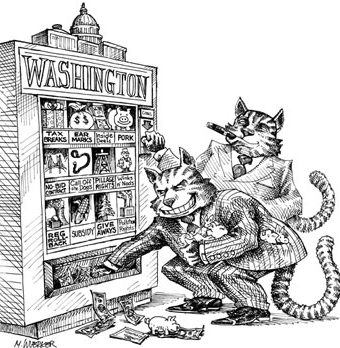